Is Lane Splitting Legal in California? 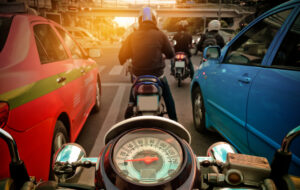 Our experienced motorcycle accident attorneys can help determine either your rights to damages if you are in an accident due that involved lane splitting in California. If you have specific questions, the experienced team at Demas Law Group can help. Call us or contact us online to set up a free initial consultation today.

What Is Lane Splitting?

Lane splitting is when a motorcyclist rides between two lanes of traffic moving in the same direction. It can also be called lane sharing, white-lining, or filtering.

In many other countries with lots of traffic, it can be a commonly accepted way for small scooters, motorcycles, or bikes to maneuver through traffic. In the United States, however, the practice of lane splitting can be quite controversial.

Whether it should be legalized nationally and whether it is safe is up for debate.

Is Lane Splitting Legal in California?

California was the first state to pass formal legislation on lane splitting.

The Demas Law Group has experience with applying Assembly Bill 51 to a variety of situations. We can help determine your rights if you were in an accident where lane splitting was involved.

Even though lane splitting is allowed in California, motorcyclists are encouraged to exercise caution when lane splitting. Lane splitting can be done safely. While lane splitting, riders must still obey the rules of the road or otherwise could be ticketed.

The study goes on to say that lane splitting can be more safely completed at speeds of 50 mph or less or where the speed differential between the motorcycles and other automobiles was 15 mph or less, deeming lane splitting in these circumstances “relatively safe.”

Although lane splitting is legal in California, it is generally recognized that it can be dangerous under certain circumstances. Indeed, when California Assembly Bill 51 passed, part of the legislation authorized the California Highway Patrol to establish educational safety tips related to lane splitting, acknowledging that it could be potentially dangerous if not executed safely.

The California Highway Patrol has released its own document detailing lane-splitting tips for drivers. These tips include:

Although there is no full consensus on whether lane splitting is safe, many groups have spoken out in favor or against the practice:

Who Is Liable in a Motorcycle Lane Splitting Accident?

California is a pure comparative negligence state, meaning that a judge would compare the negligence of both parties in the case of an accident. This also means that both parties can ultimately be considered at fault to different extents. If you are considered at fault that does not mean that you cannot pursue compensation for your damages. Any amount you receive, however, will be reduced by your amount of liability for the accident.

Whether a motorcyclist was safely splitting lanes could also be heavily dependent on the guidelines that California Highway Patrol released. Police reports and supporting opinions as well as insurance claim investigations may also be considered in the case of a collision.

John N. Demas is the founding partner of Demas Law Group, P.C., and has been exclusively representing injured victims around Sacramento for nearly thirty years. John is passionate about helping people, and he has earned a stellar reputation in the community for his dedication and successful results for his clients.