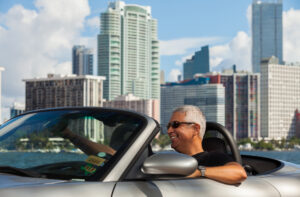 Cool autumn days are just around the corner, so what’s not to like about cruising around with the top down in your convertible?

Push back the ragtop or the retractable roof and enjoy the ride without worrying. A recent report by the Insurance Institute for Highway Safety (IIHS) indicates that convertibles are statistically just as safe as their conventional fixed-roof counterparts.

So, for once you were right when you eagerly told mom that convertibles were no more dangerous than conventional cars. Up to a certain point, at least. The data are based on crash and fatality rates for vehicles manufactured in the past five years.

Should you find yourself in a serious accident while in a convertible or any other type of vehicle, you will find a ready ally in Demas Law Group, one of Sacramento’s leading personal injury firms. We can help you stand tall against large insurance companies with deep pockets.

Call today or a free claim review while your memory of the accident is fresh and before evidence is lost.

What the Report Says About Convertible Safety

“These findings don’t suggest that convertibles offer better protection for their occupants than other cars, but they do indicate there’s no statistical basis for concerns that the lack of a permanent roof makes them more dangerous,” says Eric Teoh, IIHS director of statistical services, who wrote the report.

Teoh compared the rates of driver deaths and police-reported crashes per mile traveled for convertible and non-convertible versions of 1- to 5-year-old models during 2014-18. He also compared the circumstances and driver behaviors associated with the fatal crashes, looking at factors like point of impact and whether the driver was ejected from the vehicle, as well as impairment and seat belt use.

Are Convertibles Really Safe to Drive?

The absolute safety of convertibles is a complex issue impaired by contradictions. Teoh, the IIHS statistician, found that convertibles were involved in 6 percent fewer police-reported crashes per miles traveled than their conventional counterparts. Driver death rates were 11 percent lower. However, the likelihood that the driver was ejected from the vehicle in the event of a fatal crash was higher for convertibles than conventional versions.

Previous research has shown that, for conventional cars, a stronger roof reduces the risk of a serious or fatal injury, as well as the likelihood of ejection in the event of a rollover crash. IIHS added a roof-strength evaluation to its crash worthiness testing program in 2009, making a good rating a requirement for the “top safety pick” award a year later.

Both stretched-fabric and retractable-hardtop convertibles are exempt from NHTSA’s current roof-crush resistance requirements. However, some manufacturers have voluntarily strengthened the A-pillars on either side of the windshield and installed roll bars to provide additional protection in rollover crashes. Car crash statistics tell a lot.

When IIHS evaluated a group of midsize convertibles in 2007, most of the 10 models earned good or acceptable ratings in the front and side crash tests, though eight had poor or marginal head restraints. Since then, convertibles have remained a low priority for the testing program due to their small sales volumes.

Consumer Reports indicates that all new vehicles have standard dual front airbags, three-point safety belts in the outboard seating positions, and top-tether and latch child-seat attachments in the rear seats. Most models have side airbags, and two-seat roadsters will often allow the driver to disable the passenger side airbag to accommodate a child seat.

Side curtain (head-protection) airbags often aren’t available in convertibles because they deploy from overhead, though some luxury manufacturers offer side airbags that deploy from the door trim. Some convertibles offer a pop-up roll bar that deploys when sensors detect that a serious crash or rollover accident is imminent.

According to Consumer Reports, the latest automotive safety advances include telematics systems that alert emergency personnel if an airbag deploys, lane-departure warning systems that sound an alert if you drift out of your lane without signaling, rear view cameras to prevent back-over accidents, and blind-spot warning systems that indicate when hard-to-see vehicles are driving to the side and rear of you.

Automatic emergency braking systems are also becoming commonplace. These collision-avoidance systems apply the brakes if you’re approaching the car ahead too quickly and ignore an audible warning that sounds to alert you to the situation. Another advanced technology is lane-keeping assist, which centers your car in the lane if you start to drift. Often, all these features can be had in a single options package, according to Consumer Reports.

Armed with all the most up-to-date options, your convertible can still be subject to a serious accident. Give yourself every advantage if you are hurt in a crash that wasn’t your fault.

The most important decision you need to make is your choice of a Sacramento car accident lawyer. At Demas Law Group, we’re known for being tireless, skilled and strategic. Give us a call. We want to hear your story and get right to work giving you the sound representation you need. The consultation is free and we get paid only if and when we recover compensation for you.