Home Blog Sitting in the Back Seat — You Still Need to Buckle Up!

Sitting in the Back Seat — You Still Need to Buckle Up! 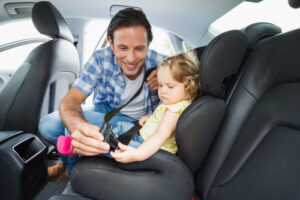 More than 800 rear-seat passengers who weren’t wearing seat belts died in motor vehicle accidents in the U.S. in a recent year, according to the Governors Highway Safety Association (GHSA). Studies show that over half of these people could have been saved if they had been wearing a seat belt. The results are clear – it’s crucial to buckle up, even if you’re sitting in the back seat.

California imposes additional fines for people driving with an unprotected child in the car. Drivers in California can face a $100 fine and points on their license if there are children in the car who are under 7 years old and less than 57 inches tall who are riding without a proper child car seat.

Why Buckling Up in the Back Seat Is Essential

Back-seat passengers who fail to buckle up are twice as likely to die in a car crash, according to the GHSA. One possible explanation is that unrestrained back-seat passengers often fly up and over the seats of the people in front of them, colliding with the steering wheel, the dashboard, and other objects. This is particularly frightening given the number of Californians who use rideshare services like Uber and Lyft, where back-seat passengers are even less likely to use seat belts.
The top excuse people use for forgoing a seat belt is that they are on a short trip or they are using a rideshare service, limo, party bus, or taxi. However, deadly accidents can happen – no matter the length of your trip or the person who is driving.

What If You’ve Been in a Car Crash Without a Seat Belt On?

The best way to use a seat belt is to use both the lap and shoulder belts. Ensure the belt is secured across your hips, over your shoulder, and across your chest. Avoid placing the shoulder belt under your arm or behind your back, as this can make the seat belt less effective or can seriously injure you in the event of a crash.

If you were injured in a car accident, whether you were wearing a seat belt at the time or not, Demas Law Group is here to help. Our lawyers have helped clients recover millions of dollars in verdicts and settlements and get on the road to recovery. Contact our experienced Sacramento personal injury lawyers today to schedule your free consultation.